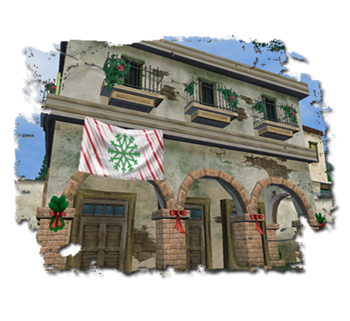 Yuletide Manor is a merchant store run by Holly Frost and the Frost family on Tortuga during the Holiday season. It is only open in December and January.

The manor is located in the middle of town, across the street from Callecutter's Tailor Shoppe. A large snowflake emblem on a red, green and white striped banner can easily be seen from outside.

During the rest of the year, the doors will be locked and the banner will not appear.

The inside of the shop is warm and inviting with a roaring fire and welcoming settee. Nikolaus Frost dances to holiday tunes played by Eleanor Frost, a musician. Leon Frost, another member of the family busily cleans their store for visitors. He also reveals a special holiday gift for those who talk to him.

Behind the counter, Holly (the Frost family matriarch) offers special holiday themed items. These items are offered in exchange for moonstones. Curiously, the family is not interested in gold.

Little is known about the Frost's, except for their apparent love of the holiday season and desire to obtain moonstones instead of gold. After January 31st, the Frosts close up their ship and sail to their home island, which is currently unknown.

Moonstones come in Small, Large and Enchanted. The latter being the most valuable and most rare to find. They are kept in the pirate's inventory along with bones and ship materials.

This special currency can only be found during the holiday season but easily located, as they are dropped by Navy, EITC, Undead Skeleton and Davy Jones' Crew enemies. They are NOT found in ship loot or animal / plant enemies.

Among the weapons the Frost's offer are a variety of Rare and Famed swords, guns, daggers, dolls, staves, even special grenades.

Game Note: The painting of the carrack in the Secret Trading Outpost also appears in the Manor.

Retrieved from "https://piratesonline.fandom.com/wiki/Yuletide_Manor?oldid=337564"
Community content is available under CC-BY-SA unless otherwise noted.