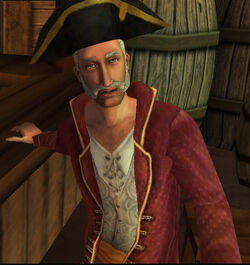 This mercenary quest is offered by Josie McReedy, Captain Job, and Johnny McVane, to defeat a randomly selected type of enemy for gold.

Defeat X amount of some type of creature. (ex., Terror Wasps, Navy Guards, French Undead Maitres, Thrall Captains, Urchinfists, or Assassins). The number and type of creatures will vary and increase in difficulty as you advance in level. If you don't like the type of creature given, you then back out to the top menu and try again. You will randomly get another type of creature and quantity to kill.

When complete, return to the character who offered the quest for your reward. These quests are always available for a pirate needing to pick up some extra coins for anything his/her heart wants.

Note: These quests may only be completed once each day.

Retrieved from "https://piratesonline.fandom.com/wiki/Work_For_Hire:_Defeat_Enemies?oldid=322647"
Community content is available under CC-BY-SA unless otherwise noted.