Weatherby Swann is the father of Elizabeth Swann and Governor of Port Royal.

He is a middle-aged, balding man with a big heart and aristocratic nature. Though clever and intelligent, he was often too trusting of those around him and expects common courtesy and the law to win out.

Though generally mild-mannered and refraining from violence, Weatherby is not afraid of confrontation, especially when it comes to the safety of his daughter. He even defied a royal warrant presented by Cutler Beckett when he freed Elizabeth from jail with the intent of sending her to England and avoid a certain death by hanging.

How he met is final fate is unknown, but apparently Weatherby was put to death by a member of Lord Cutler Beckett's Black Guard after Beckett felt he had no further use of him. 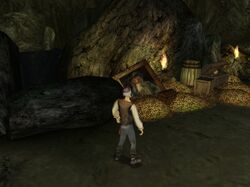 Though the game is set prior to his death, Weatherby does NOT appear in the Pirates Online game, except in portraits which appear in various places around the islands, such as the Gold Room, Barbossa's Grotto, and Fantifico's Manor, and Yuletide Manor. It can be also seen in Governor's Mansion.

Elizabeth Swann, however, mentions him when the player first meets her, saying that he has gone on a long trip overseas and will not come back, pertaining to the release of the Black Pearl. He is also interested the the Nine Rogues paintings.

It is also known that he offered a reward of one thousand Gold doubloons for the capture of Jolly Roger.

Retrieved from "https://piratesonline.fandom.com/wiki/Weatherby_Swann?oldid=338004"
Community content is available under CC-BY-SA unless otherwise noted.