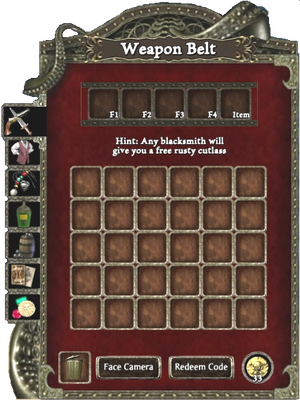 The Weapon Belt is part of each pirate's Inventory and contains selected weapons ready for immediate use.

To open, press "I" (Inventory) or open the Sea Chest and click the Weapon Icon.

The belt is displayed at the top.

Any usable weapon in the chest can be added to the belt, simply by selecting with the mouse, then dropping into a belt slot. Each slot is assigned to a key (F1 - F4).

Only Navigation Tools and Cannon Rams can be placed in the Item Box.

A pirate can have up to 30 weapons, sailing items and cannon rams in their inventory, plus 4 weapon items in the primary belt slots. The fifth slot is for a passive Sailing Boost or Cannon Boost item.

A pirate can also dispose of items in the inventory, by placing it into the Trash Bin. The Face Camera button allows a player to see their pirate while holding their weapon.

To use a desired weapon during regular game play, simply press the appropriate key.(F1-F4) or left-mouse click on the weapon in the lower-right of your game screen where the belt will display.

Retrieved from "https://piratesonline.fandom.com/wiki/Weapon_Belt?oldid=337757"
Community content is available under CC-BY-SA unless otherwise noted.