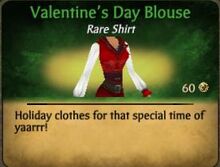 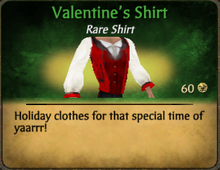 This quest is only available during the Valentine's Holiday Event (During days around February the 14th). The player has to help Sid Tackem win the affections of Dedrie Dunnam, who are located on the Port Royal docks and in the Faithful Bride on Tortuga, respectively.

The reward for the quest is the Valentine's Day Shirt for males, or Valentine's Day Blouse for females. The same pieces of clothing are included in the Peddler set, but has to be purchased. So, if you want to save money, you could do the quest to receive the shirt, and buy the rest of the set. These clothes are only available at this time of the year!

The following poem was used in the Pirates Online Grog Blog announcing the 2011 version of the event: 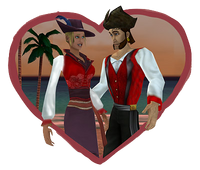 Poor old Sid Tackem,
Would love to ask his girl out,
As for guts ... well ... he lacks'em,
Visit Erin in the Rowdy Rooster to ignite the flame,
Then give someone a card
So you could do the same.

Near this time a pirate could use the Flirt Emote or by typing /flirt to generate these cheesy pick-up lines. Your pirate would also wink, flirtatiously.

Retrieved from "https://piratesonline.fandom.com/wiki/Valentine%27s_Day?oldid=334903"
Community content is available under CC-BY-SA unless otherwise noted.