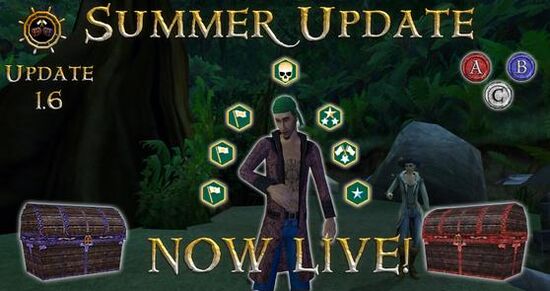 Our Summer Update is now live! This update features the release of Capture the Chest and Domination, two brand-new objective PvP game modes!

You could say this update has been a long time coming... hasn't it? Since Fall 2019, you say? Right?

Okay, in all seriousness, we kinda missed our previous public release date... by a lot. But ultimately there was a technological reason why Capture the Chest was delayed for as long as it was. We had decided to hold back the release of CTC and take the time to make sure it works just right rather than rush its release out and have it be a disaster when it launched.

We know this was an extremely long wait since we first announced it, so again, we thank you for your patience.

But with that out of the way, let's jump right into the announcements for this Update 1.6!

Yarrr! Ready yerself for battle, mateys! Each team must steal the opposing team's treasure chest and take it back to their base. The team with the most treasure chest captures wins the game. Defend your base and prevent the other team from stealing your loot!

If ye haven't seen the CTC trailer yet, ye can check that out below!

A once abandoned area that is now held by two rivaling pirate crews, you must fight for supremacy on the island of “Marauder’s Cove!” This is an optimal map for larger pirate crews, which can go up to crews of 7 vs. 7! Players will soon be able to use the island of Tortuga as a map, which is a more compact location that is better suited for smaller teams.

Capture the Chest also introduces a new infamy track named "Objective Infamy", allowing for exclusive new clothing and tattoos to be purchased as you rank up from participating in CTC and Domination. As you capture chests from your opponents' base, you will earn objective infamy. Look for Rose Cabinmenace, a new vendor, located across from Butcher Brown on Tortuga to purchase Objective Infamy rewards.

Visit any shipwright to pick up a quest that unlocks a brand-new CTC-themed emote.

Arrrr, matey! This be an all-out battle for total domination. You must capture and maintain control of bases to earn points. The first team to 1000 points or the team with the highest score after the time limit wins. Defend your bases from being captured to prevent the other team from earning points! 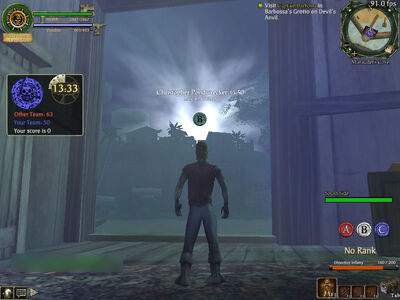 This is an Objective Game Mode that is available to be played on Marauder's Cove. As an objective game mode, players will earn Objective Infamy while playing this mode. The infamy earned in this game mode will contribute to the same objective infamy reward system as the Capture the Chest game mode.

Have ye ever wanted to watch a PvP match but not actually participate in the match itself? We've got the feature just for you.

In an update coming very soon, players will be able to join PvP matches as spectators and view everyone in the match as if they were their own character. You will finally be able to share your PvP experiences with your non-PVP friends and let them get right into the action watching the match live in-person. This is an unprecedented amount of intractability that players will have with each other in PvP game modes in Pirates Online.

Back in the good ol' days of Pirates Online, there used to be a particularly special area that ye could ONLY access through a savvy glitch or two! More specifically, I seem to recon an Empty Kingshead that we used to fancy sailing ourselves to in the early POTCO days. This location has been added back as a historical Exploration lobby map.

You can now explore all the nooks and crannies of any PvP map without worrying about the timer booting you out!

For the past 6 years, we have been focusing on recreating Pirates of the Caribbean Online. We have finally have reached a point where we have rewritten the original Pirates Online server from scratch. There's almost nothing left that we need to rewrite from the original game - it's pretty much all here! At this time, we are now focusing on bugfixes and polishing to make sure the game runs as smoothly as possible. But we're also looking at expanding the game and making it everything we always dreamed it would be, and soon will be adding some very ambitious all-new content.

Throughout the past few years, we have been working up to bigger and more grand projects. In 2017, we introduced Hollowed Woods. This was our first real expansion to the game and was such an incredible accomplishment for us at the time. It gave us hope that we could not only remake the original game, but we could actually expand on it too and make it better.

The following year in 2018, we introduced Forsaken Shallows. This significantly expanded the amount of weapons players could loot and redefined the looting meta itself. All of this gave us experience in how each of these systems within the game work and how we can continue to expand on them.

In 2020, we did our biggest world design project to date: the Crystal Caverns of Hollowed Woods. This was an incredible undertaking to accomplish. We are so happy with how the cave turned out, which was inspired by the ending of Book 2 in Avatar the Last Airbender.

Since the release of tlopo-pyp-v1.0.0 in March 2020, we released several major expansions to the game and countless quality of life improvements and bugfixes. To highlight the most important changes:

- Lobbies has been released! This dramatically increased social interaction within the game.

- Now PvPers can choose their team, map, and communicate match rules with other players before loading the match.

- Players can now find a group interested in playing the exact same thing they are much more easily. No more long sailing trips to Tormenta!

- The Crystal Caverns of Hollowed Woods quest, cave, and all of their new weapons, tattoos, etc.

- The Ray of Light has been fixed, along with multiple tutorial improvements.

- The loot timer and various other loot GUI quality of life improvements.

- Dozens of building interiors in the game have been renovated with attention to detail and lore to really make the game feel alive.

- We released the Muertos Mojito PvP potion to allow you to skirmish with your friends anywhere!

- Weapons have been rebalanced to give each weapon type its own unique feel.

- Extra attention was placed on legendary weapons, giving each its own unique purpose in the world.

A little-mentioned project we have also been working on for the past few years has been fixing every misplaced prop in the game and expanding the detail of the game as well. Almost every occurrence of floating or clipping props have been fixed.

We have a lot of really great things being worked on right now. We are a very small group here though, so it does take us some time to get it all just right, but it's going to be worth it.

Here's a sneak peek at the next major update to come: an all-new Island and Story Quest. 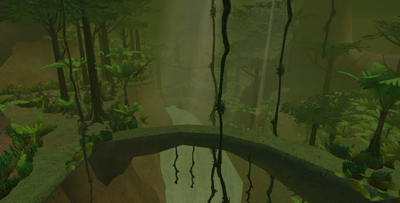 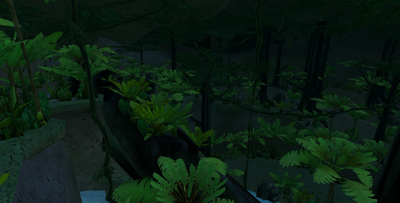 That's all from us for now. Back to work for us all! We will see ye all soon with more updates!