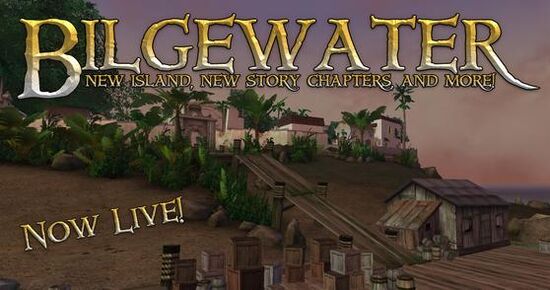 Grab a snack and sit on down, because we've got a lot to share with ye this wonderful evening.

Today is a day that we've been looking forward to for almost five years. Great changes are coming to the Caribbean mates... and it all starts right here, right now!

Those of ye with a very savvy eye might have caught some of our little teasers over the past year hinting at what was coming. Did ye notice the cover image on the What's New page, the cover image of the April Peddler Spotlight blog post, the cover image on our 2020 Fall Update blog post? We even accidentally posted an earlier revision this very blog post 6 months ago. (Yes, we prepare these things that far in advance!)

We've been working on this update since early 2017, and today's release is the culmination of thousands of hours of hard work reaching its highest ever peak yet. We are so excited for what's in this update, and for everything else that is coming next.

Today, we're launching the best content update yet to The Legend of Pirates Online; and without further ado, let's jump right into it!

FEATURE: The Island of Bilgewater

The Caribbean's horizon is changing, mates. Bilgewater has been discovered northwest of Rumrunner's Island!

This spit of rock is the stronghold of pirates! The notorious pirate guild, the Keepers of the Code, has its headquarters located on Bilgewater. Earn the trust of their infamous guildmaster, Alaina Seastone; along with her officers, Jesse Tidus, Joan Tidewalker, Daniel Selkirk, and more.

This island is home to over 25 brand-new interiors! Each location has been crafted with extreme attention to detail. Story references are present throughout all environments. There are over 1,000,000 triangles on Bilgewater mainland, 10x higher geometric detail than any other island location in the game. We have also built visual zones into Bilgewater that show only what's necessary for ye to see, keeping frame-rates high even with incredible detail.

Bilgewater is also home to brand-new enemies, such as Monster Crabs and Golden Undead Skeletons!

Below are some places on the island we'd like to highlight!

Explore the Mountaintop Scenic Overlook atop one of Bilgewater's mountains. Take in its breathtaking views of the Caribbean and of the island itself.

A memorial for Austin/Vector is located in this area. Austin was a game developer for TLOPO who tragically passed away earlier this year. Without his efforts, we would not be playing Pirates Online today.

What's all the buzz about the Everlasting Falls?

This jungle is not yer ordinary neck of the woods, mate. This location is a completely reimagined view of jungles in Pirates Online. Explore a location unlike anything ever before seen in the Caribbean.

Navigate through a treacherous underground Murder Hornet's nest built deep within Bilgewater's mountain. This watery oasis is home to a dangerous stream infested with Caribbean Caimen and River Alligators lurking in the waters protecting a sealed mushroom cave. Duck below the tree roots as ye find yer way through underground tunnels inside the Bilgewater mountain.

Do ye enjoy yerself some shiny objects? Well, the Gilded Quarry has no shortage of those because Golden Undead Skeletons control this mine. I believe their golden-plated ribcages and jaws are only fit for me sword!

Visit Charity Ironflint and Wade McCallaster as they work to investigate how Golden Undead Skeletons are evading Madame Bernadette's protective shield and what this means for Bilgewater and the Keepers of the Code.

=> Chapter 4: Search for the Headstone

After completing the Treasure Map: Recover the Black Pearl, return back to Captain Jack in the Faithful Bride on Tortuga.

The Navy is on the hunt for something called the "Headstone", which is believed to contain unimaginable power. Work alongside Joshamee Gibbs and the original Black Pearl crew to establish a secure hideout.

The gypsies of Padres del Fuego formed an alliance many years ago. Each one knows a different piece of information about the Headstone, keeping the knowledge private from each other so the full story would never come out if one of them were captured. However, as time went on, the gypsies began to argue amongst each other and their alliance ultimately dissolved. Learn more about the Headstone's secrets as ye help them reform their alliance.

After completing Chapter 4, sail to Bilgewater and learn about the Keepers of the Code and their notorious guildmaster, Alaina Seastone.

Bilgewater has been concealed for years by the magic of the benevolent and powerful Madame Bernadette. Her protective shield has enshrouded the island and kept Jolly Roger, the Navy, and the EITC out... until now, that is. Strange things are happening on the island and the longevity and stength of Bernadette's shield is coming into question. Jolly Roger is begining to make a presense on Bilgewater with his undead army, but he's not showing in his usual form.

The protection of Bilgewater is of utmost importance. The Keepers of the Code are the only remaining hope pirates have if they want to fight back against Jolly Roger's undead army. Ye must earn the trust of the Keepers' as ye search for what or who is behind this island mystery.

Many of the Keepers of the Code have documented their journeys over the years. Ye may have even seen them about the islands once or twice. A list of excerpts are included below:

Stop on by the shops on Bilgewater and check out the new dyes, ink, and garb!¹

Choose from an exotic selection of tattoos at Silverink Tattoo Parlor! There's all kinds of new options to choose from, such as a Male Skeleton Mermaid, Lightning Scars, a Red Goldfish, and a colorful Parrot!

Go to Will's Tailoring Shoppe to spice up yer wardrobe with some impressive new fittings! We particularly fancy the new variety of colorful Recruit Bandanas! 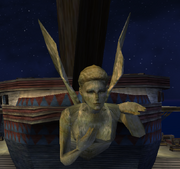 Visit the shipwright on Bilgewater to customize the prow of yer very own vessel with an assortment of the finest hood ornaments in the Caribbean!¹  Ye can choose from an assortment of figureheads, such as the following:

There's also a variety of new sail colors and emblems to choose from:

And that's just a taste! We really hope ye enjoy this incredible new update! Make sure to check out the release notes for complete details on everything we've added.

As we get further into 2022, we will begin focusing more on content related to sailing and questing. Chapters 4 and 5 are just the beginning of a larger story that we have planned. We will also be putting more effort toward long overdue features, such as inventory storage and trading! For a sneak peek of something else we've been working on, check out the picture to the right...

We are not announcing any release dates for when any of these features are coming, but we want to at least let ye know what we plan to be working on. We understand how desperately players want and need some of these features.

If ye already have a character that has a full inventory and ye don't want to delete any of yer items, we recommend playing on an alt account or character in the meantime while looting. We know this isn't a perfect solution but it at least guarantees ye don't lose any of the loot ye've already obtained!

What are yer thoughts on this update? Let us know in the comments below!

1. Access to Bilgewater NPC vendors requires earning the trust of the Keepers of the Code through the completion of the Bilgewater story quest. Vendors on this island do not trust outsiders.