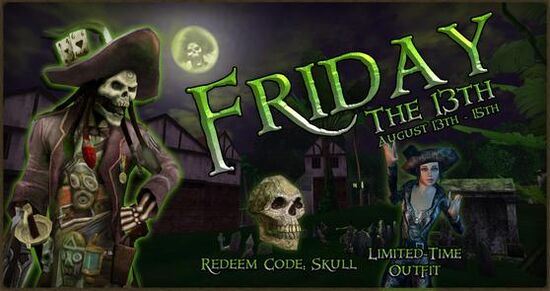 You know it, I know it. This Friday be a very... "special" day. Ghosts and ghouls be about, and all matter of unholy or... unlucky things could happen.

Luckily, this year, I heard that the Keepers of the Code, a fine lot of pirates, teamed with Tia Dalmas network of voodoo practitioners to stave off Jolly Roger's accursed Muertos Moon. Something about a counter-spell and totems and stones... a whole bunch of magical mumbo-jumbo if you ask me. But, for the time being, it be safe to say that the Muertos Moon won't be returnin' this weekend. But don't count it out for good. Jolly's a relentless one, I have no doubt that he'll find a way around these protective spells in the future.

As for me? I be celebratin' our less than... murderous Friday the 13th with a sale! Undead garbs! One could even call them the Garb of the Undead if ya wanna get extra fancy. Dress up like a skeleton, and if yer feelin' extra ghastly, brew up a Muertos Mojito at any potion table and duke it out with your friends in true undead fashion!

And as a bonus, I hear if ye whisper the incantation "skull" into yer Sea Chest, it'll spawn in a special grenade that well, looks like a skull!

What's that ye say? Incantation? Into the Sea Chest? Ye don't know what I'm talkin' about? Fine, I'll be extra direct. Use the redeem code "skull" to get a free Skull Grenade! You can find the redeem code button in your inventory panel (I).

Whew, I don't know what came over me. "Redeem codes"? "Panels"? What be this madness? Macomo clearly gave me something more than a hearty tonic, that's for sure!

Anyway, enjoy the weekend, mates. Jolly may not be afoot, but watch yer step. Bad luck be abound!