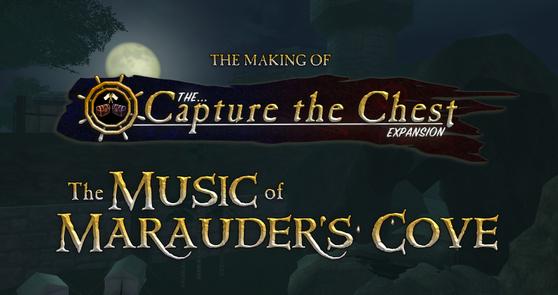 In anticipation of the release for Marauder's Cove and Capture the Chest later this fall, I've been given the green light from the higher-ups in the TLOPO Development Team to go ahead and release the game music for the new map!

The Marauder's Cove music will be the first time my work will be implemented into the real world of this game instead of inside taverns. There are currently 2 tracks for Marauder's Cove, which I plan on coming back to in the future and possibly adding more. The music is pretty standard for the game, one track is for battle and one for idle music. Without further interruption, let's take a listen!

This track is really special to me. I've had this melody stuck in my head since I began composing around 12 years old. This was probably one of the first I made, quite honestly. I believe it came as inspiration from the Pirates of the Caribbean: On Stranger Tides movie. I remember absolutely loving the "Spanish Theme" from the film, and couldn't get it out of my head.

So, I sat at the piano and came up with this very, very simple melody. It's dark, it has a march to it, and it sounds like it belongs in the 18th century. Not realistically of course (The music then was Beethoven, Handel, and Schubert), but in movie terms with relation to how the POTC soundtracks worked, it fits. I really hope you guys enjoy this song as much as I have over the years creating it!

This was created back in either March or April of this year and yes, we have been working on this project for a couple of months now. It has only been recently that I was able to see my music physically in the game and I must say, it's so awesome hearing this brand new music inside this map!

Marauder's Cove is a huge map with new elements that you have never seen before! Creating the music for such a map earlier this year was challenging, especially since back then, it wasn't playable. We had working concepts, and I was provided pictures to go off of, like this one below:

The developers were hard at work bringing something from their heads into reality in this game, and I had to mirror that with my music. In a sense, I eyeballed it, and I do hope we came close to what you, the audience, expects for this awesome and fun new map.

Also, I do have one or two unofficial tracks for you to listen to, because why not? If you've read this far, it obviously means you are dedicated! So you should be treated to the inside workings of how we create artistic content for the game.

I may or may not revisit this track in the future and find other purposes for it within the game. But I would love to hear your feedback on it down below! Also, yes the map was originally called Fort Vagabond. That was our working title until it changed to Marauder's Cove relatively recently.

Unfortunately, for obvious reasons, we couldn't use this due to copyright but I couldn't resist but making one fun track. It sounded really cool with the original Pirates of the Caribbean melody in it, and I'm sure if we were Disney they would happily said yes to it. But we're not Disney, and we must maintain within the copyright rules for the game.

That's all for now, I do hope you enjoyed this article and that is has gotten you properly hyped for Marauder's Cove coming out later this fall! I'll see you on the battlefield soon, pirates!

Until then, take care,

Retrieved from "https://piratesonline.fandom.com/wiki/User_blog:ElizaCreststeel/DEVELOPER_INSIDER:_THE_MUSIC_OF_MARAUDER%27S_COVE?oldid=336615"
Community content is available under CC-BY-SA unless otherwise noted.