An account without Unlimited Access, otherwise known as a Basic Access account, could not level their overall notoriety past level 14 and weapons past level 7. Basic Access accounts would also have many other restrictions such as being limited to only the light ship classes, two pirates, basic skills and reduced rewards. 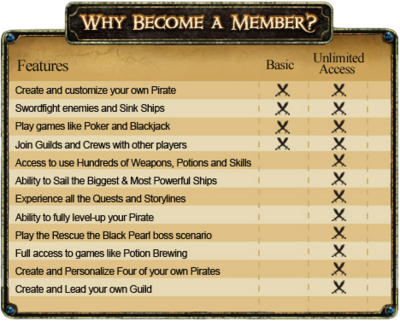 As of August 20, 2013, everyone's account was upgraded to Unlimited Access to enjoy the game to the fullest extent for one final month until the game's closure on September 19th, 2013. 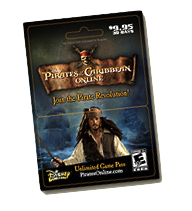 Unlimited Access used to only be purchased with a credit card directly from the Pirates Online site or with a code from an existing Pirates Online game card. However, game cards are no longer available for purchase.

When Disney announced the closure of Pirates Online, all players' accounts were upgraded to Unlimited Access for free for the final month of the game.

Retrieved from "https://piratesonline.fandom.com/wiki/Unlimited_Access?oldid=322645"
Community content is available under CC-BY-SA unless otherwise noted.