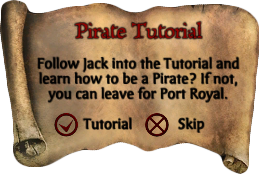 The Pirate Tutorial is a series of lessons that a new pirate will learn in the earliest stages of the game. Lessons include how to chat, how to fight, equip skills, complete quests, and many other important game features. During the Tutorial, players are guided by Tutorial Pop-Up Hints, and Tutorial Game Hints.

The Tutorial starts out in a jail on the small island of Rambleshack. In the jail, the player awakens to see Jack Sparrow, and begins customizing their unique pirate avatar, with Jack giving instructions in the background. There are many customization options including eye color, height, body type, nose size, nose positions, hair color, and much more.

After you finish with the cosmetics of creating your pirate, you can give them a name.

You can choose from pre-made names, or type your own, which will have to go through an approval process over a couple of hours. If your name is not approved, you simply submit a new one from the character selection screen.

After finishing Pirate Creation, Jack teaches you how to break out of jail. Once you so, you are asked if you would like to skip the core parts of the Tutorial. If you say yes, you are immediately teleported to the Port Royal part of the Tutorial.

If you select no, you exit the jail and load the main part of Rambleshack. This is where the Tutorial Quest begins. The ray of light (which guides you to any tracked quests) is shining on an Old Warehouse across from where the jail is located on the island. Once you enter the Warehouse, you are ambushed by Will Turner, mistaking your for an Undead Solider of Jolly Roger, who is attacking the island in search of Jack Sparrow. Realizing that you are an ally, and not an enemy, Will teaches you how to use a sword, and you to use Skill Points. Afterwards, you exit the Warehouse to the beach of Rambleshack, where a group of Undead are waiting to attack. You must defeat them with your new sword to continue the Tutorial.

After defeating the Undead Skeletons, you make your way to a ship docked on the island. It turns out, the captain was payed by Jack Sparrow to take you to Port Royal. He tells you to man a cannon, and take down any undead ships that appear. After defeating all the undead ships in the bay, Jolly Roger himself teleports himself onto the ship, thinking Jack Sparrow was there, since he payed Beck to break Jack out as a trap. Instead, he finds out that Jack Sparrow was aware of this, and payed Beck double to take you to Port Royal instead. Infuriated by this ordeal, Jolly Roger turns beck into an undead skeleton, and forces you to walk the plank, and swim to Port Royal. As you swim away, you can see the Grim Reaper being sunk by Jolly's flagship.

Landing on Port Royal and Getting Your Compass

After swimming to the beaches of Port Royal, you begin the Set Sail Story Quest. The quest guides you to a Graveyard, where you must defeat Undead Gravediggers. After doing so, the quest guides you to King's Run, where you meet Tia Dalma for the first time. She tells you of the many impending dangers in the Caribbean including the EITC and Jolly Roger. She also instructs you to seek out Elizabeth Swann, as she can help you begin the first step of saving the Caribbean, by recovering The Black Pearl from the Navy. She then gives you a Compass, which begins the Compass Tutorial. After the Compass Tutorial is completed, you are instructed to recover release orders for Pearl from Cadets on Port Royal.

Meeting Elizabeth Swann and Getting Your Ship

After recovering the release orders, you visit Elizabeth Swann inside the Governor's Mansion. She explains that you need to leave Port Royal before the Navy realizes the release orders are gone. She suggests to head to Tortuga to find Jack, to find a way to recover the Pearl. Before you leave, she orders the Shipwright of Port Royal to give you a Light Sloop, free of charge.

Once you receive the ship, you set sail for Devil's Anvil.

While making a side-stop on Devil's Anvil, you discover the hidden Barbossa's Grotto, where he and his mate, Leon Warhawk are hidden. Barbossa then teaches you how to aim and shoot a pistol, by using his cursed monkey as practice. Afterwards, he explains the code, which forbids a pirate to shoot any living humans, which includes the Navy, EITC, and other Pirates. However, animals, undead skeletons, and ghosts are allowed to be shot.

Originally, the pirate would leave the jail and then entering the next building to meet Doggeral Dan and his wife. They were Rambleshack locals who were packing up to flee Jolly's attack on the island, but would take the time to instruct the pirate about their Sea Chest before sending them to meet Bo Beck.

Will's part would occur later on Port Royal. It is likely that this portion of the tutorial was cut to streamline that part of the game, allowing players to progress faster. It also explains why the building on Rambleshack Will is hiding in is exactly like the warehouse on Port Royal.

Retrieved from "https://piratesonline.fandom.com/wiki/Tutorial?oldid=325428"
Community content is available under CC-BY-SA unless otherwise noted.