Treasure Fleets are large groups of powerful ships with a center 'Boss' ship, which travel according to a random route (their destination is commonly Padres del Fuego). Pirates are challenged to sink the fleet before it reaches its final destination. To date, two major fleets have been encountered - the EITC Fleet and the Royal Navy Fleet. Approach with extreme caution, as they are very dangerous.

The first form of Treasure Fleets were Expedition Fleets of the East India Trading Company. These groups of powerful sailing vessels were dispatched to look for the El Patron's Lost Weapons, which Cutler Beckett believed would help tip the balance of power in the region. They intended on landing on Raven's Cove (at that time an unknown island) and bring back the armaments that were hidden there. Pirates in the region made every effort to stop them. Not long after, a force of Jolly Roger's Undead Army laid siege to the island and both sides fought until the settlement there was nearly decimated.

After the Expeditions stopped going to Raven's Cove, the Royal Navy and the EITC began using Treasure Fleets to ferry wealth across the islands. 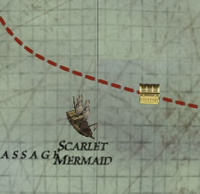 Pirates can locate the fleet and its course on the Map ('M' on the Keyboard, the Boss ship is highlighted as Treasure Chest on the Map).

If pirates sink the Ship Of The Line but there are still escort ships left, one of the escort ships becomes the boss ship and will have the treasure chest symbol appear over that ship.

The ships that comprise these fleets are some of the largest and most dangerous to ever sail these waters. They will NOT open fire on passing vessels, but once a pirate ship opens fire on them - ALL vessels break their formation, return fire and immediately pursue. 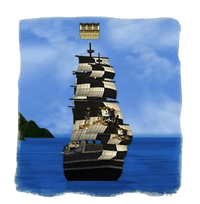 These vessels are of the Ship of the Line class and have been spotted at Level 79-81!

These vessels are of the War Frigate class. They surround the main vessel, make efforts to hinder any assault, and have been spotted at Level 69-71!

As well as EITC Treasure Fleets sailing the seas, carrying great loot, The Royal Navy Does this too.

These vessels are of the Ship of the Line class and have been spotted at Level 79-81!

These vessels are of the War Frigate class. They surround the main vessel, making efforts to hinder any assault, and have been spotted at Level 69 - 71!

Retrieved from "https://piratesonline.fandom.com/wiki/Treasure_Fleets?oldid=324938"
Community content is available under CC-BY-SA unless otherwise noted.