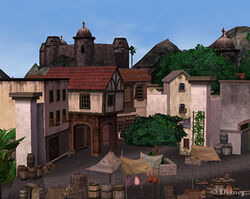 Note - Cuba only has a dinghy on the beach, like on the Wild Islands.

Most towns also have:

Towns are where a pirate will be doing most of their quests, so it is best that you know their layout; especially sprawling ones like Port Royal and Padres Del Fuego.

Unlike the main island settlements, the island bases Isla De La Avaricia and Ile D'Etable De Porc for the Spanish and French privateer fleets offer a few necessary comforts for pirates fighting for their respective patrons.

Retrieved from "https://piratesonline.fandom.com/wiki/Towns?oldid=322508"
Community content is available under CC-BY-SA unless otherwise noted.