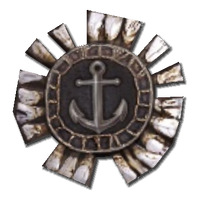 Pirates can earn these special voodoo objects that allow them to use teleportation and travel directly to that island. Each totem, except for the SvS islands, require you to complete a quest to earn the totem.

Once a pirate reaches Notoriety level 7, they are given a quest by Tia Dalma (Secret of Tortuga Teleportation), who has them gather items for her and in return she grants the pirate their first totem.

Once the pirate reaches Notoriety 12, a quest from Lucinda, (Secret of Port Royal Teleportation), will allow the pirate to obtain -

At Notoriety 14, a quest from Tia Dalma (Secret of Cuba Teleportation) will grant the pirate -

Once a pirate reaches Notoriety 30, they can take a quest from Crazy Ned (Secret of Raven's Cove Teleportation) to obtain it.

Any pirate can always use these totems:

Use a Totem To teleport to an island, click on the Map icon from the Sea Chest or press the M key.

On the map, islands with a green light next to them indicate the pirate has a totem for that island. Clicking on the Totem symbol will instantly transport them there.

Note: At one time, there appeared to have been a Kingshead Totem, but it has been removed from the map.

Retrieved from "https://piratesonline.fandom.com/wiki/Totem?oldid=332606"
Community content is available under CC-BY-SA unless otherwise noted.