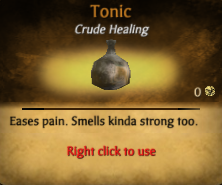 A Tonic is a special potion that recovers the player's health and voodoo. If your pirate's life or voodoo levels get too low, you can restore them using the 'T' key to drink a bottle of medicine bought from a gypsy.

A Tonic can now be used to Revive fellow pirates who have fallen in battle after having been knocked out by enemies. The Revival is a feature used to prevent players from directly going to jail, wherein the pirate has to use one of his tonics to heal his mate.

Retrieved from "https://piratesonline.fandom.com/wiki/Tonic?oldid=340328"
Community content is available under CC-BY-SA unless otherwise noted.