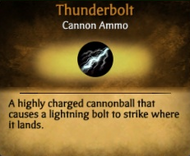 Thunderbolt is a highly charged, long-range cannonball that causes a lightning bolt to strike where it lands. The ability to use these rounds becomes available at Cannon Skill level 12.

Increasing the Thunderbolt ability will increase the overall damage it does. Additionally, damage levels can also be increased by using Open Fire, Barrage and Cannon Rams. Thunderbolt rounds are only mildly effective against ships masts and sails.

However, it can cause considerable hull damage.

They can be purchased at any gunsmith on the main islands and the privateering islands for 12 gold coins (per 25 rounds).

To use Thunderbolt, be stationed at a cannon and press 5 or click the

icon at the bottom of the screen. Once one round has been fired, it will take several seconds to reload. You can improve your reload speed by using the Passive Skill Rapid Reload.

Below is a table of Cannon Damage for Thunderbolt:

With Ship Customization, when pirates reach Rank 4 Hull Upgrades, they can choose between 5 different upgrades. One of these upgrades is the Storm Chaser Upgrade, which gives the ship a 15% chance of a cannonball fired out of a broadside, to be Thunderbolt. If a pirate chooses to progress to Rank 5 or 6, they will have an even higher chance of Thunderbolt broadsides.

The sheer range of this round makes it very effective at engaging and doing large amounts of damage while being out of range of enemy counter-fire. Many pirates will use this round to damage a ship's masts from a distance before closing in.

Also, in privateering using from a forward cannon can keep you in range of a fleeing target.

Since the thunderbolt has the farthest range cannon ammo in the game so far, take note that you must fire from a lower angle than you would other ammo (Firebrand, Round Shot etc.). 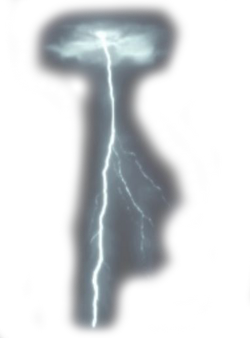 Retrieved from "https://piratesonline.fandom.com/wiki/Thunderbolt?oldid=332499"
Community content is available under CC-BY-SA unless otherwise noted.