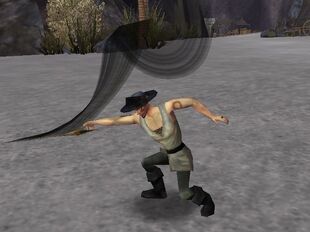 Thrust is the fifth, final, and most powerful combo ability for the Cutlass the pirate can learn. It is a very powerful stabbing attack.

Your pirate will reel back, spinning their sword in the air, and then suddenly lurch forward, driving their blade into an enemies stomach!

This skill is unlocked at Cutlass Skill Level 17.

Retrieved from "https://piratesonline.fandom.com/wiki/Thrust?oldid=326437"
Community content is available under CC-BY-SA unless otherwise noted.