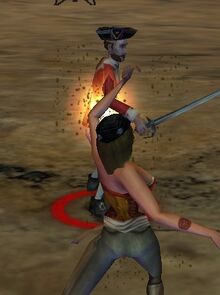 Throw Dirt is a Dagger skill and a little 'dirty' trick. The pirate tosses a handful of dirt into their enemy's eyes - blinding them temporarily. The enemies ability to hit and defend themselves is reduced greatly. Anything that a pirate or enemy has attuned will be broken when this skill is used on them.

Increasing this ability increases the amount of time your enemy is blinded.

To use Throw Dirt, have your dagger drawn and press 3 or click the

icon. It will take several seconds for this skill to reset.

In PvP, when a pirate is attacked with this skill, their screen becomes covered in chunks of dirt and obfuscates their field of the combat field, just as though they had dirt thrown in their face.

Retrieved from "https://piratesonline.fandom.com/wiki/Throw_Dirt?oldid=331563"
Community content is available under CC-BY-SA unless otherwise noted.