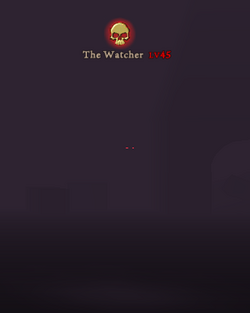 The Watcher is a level 45 ghost boss that spawns with 85,000 HP. She resides in her own hovel in Hollowed Woods waiting to attack any pirates who dare to cross her path. It is believed that she may be the source of the frights and fears occurring in Hollowed Woods.

The Watcher is an ancient spirit of the forests surrounding Port Royal who has existence since long before its founding. After the Destruction of Port Royal, the citizens of the old town believed it would be safer to build a town deep within the woods, farther away from Jolly Roger. Curious, she watched the villagers from the windows of their houses, desiring to learn more of these new people. Unfortunately, their excavation of the land and Captain Windshadow's destructive interference disturbed the ancient shrine built in her name by native tribes, and she massacred the town in her rage.

Retrieved from "https://piratesonline.fandom.com/wiki/The_Watcher?oldid=339559"
Community content is available under CC-BY-SA unless otherwise noted.