The Ruby Curse is a very powerful legendary cursed sabre with the unique break attack Inferno Sweep. This ability ignites all enemies within a certain radius around the user with a mystic green flame, burning them for 10 seconds. (The Ruby Curse & Blade of the Abyss are the only weapons able to use this ability.) This weapon can only be found from Cicatriz, a boss located in El Patron's Mine.

This weapon has an attack power of 102, making it the second strongest sabre behind The Sapphire Curse. Like this weapon's counterparts, it gives the user a 3 point boost to the Parry skill, increasing the chance to block an incoming melee attack. In addition, the blade grants fire immunity, protecting the user from gradual burn damage. It also leaves behind a blood red shadow that it shares with Blade of the Abyss and Devil's Claw, instead of the traditional black shadow that most Cursed Blades are equipped with. 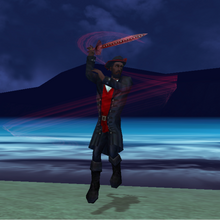 Retrieved from "https://piratesonline.fandom.com/wiki/The_Ruby_Curse?oldid=342258"
Community content is available under CC-BY-SA unless otherwise noted.