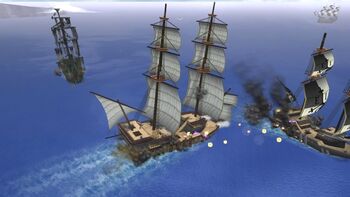 The Magic was used in several sea battles, such as the Battle of Padres, where it sunk up to 40 EITC ships. Recently, with Treasure Fleets carrying spoils of El Patron's Lost Weapons, the Magic was used to battle them off. It was then seen sailing away, presumably to Raven's Cove.

Duel to the Death

Somewhere around this time, Walter was sailing with the ship. Out of nowhere, Ezekiel Rott appeared on the ship The crew (not the top ring of the Marceline) watched as both rivals dueled to death. Rott killed Walter in the end, and the latter's ghost appeared on Cuba to tell the tale. The Marceline found the ship, empty, and began questioning Rott's role in it.

Retrieved from "https://piratesonline.fandom.com/wiki/The_Magic?oldid=324909"
Community content is available under CC-BY-SA unless otherwise noted.