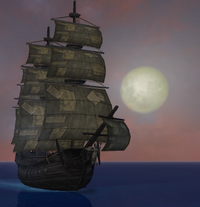 The Liberation of the Black Pearl is the main Story Chapter of the game. It consists of 3 quests, and is usually finished when a pirate reaches approximately level 30, where the player then begins the Raven's Cove Story Quest, the presumed first part of a second Story Chapter that is still under development. The main theme of this Story Chapter is to take back the Black Pearl from the Navy, and return it to Jack Sparrow, its rightful owner. Doing so involves countless tasks, as well as gathering the crew of the Black Pearl, and a Boss Battle Finale.

Story Quests Included in the Chapter

Retrieved from "https://piratesonline.fandom.com/wiki/The_Liberation_of_the_Black_Pearl?oldid=324907"
Community content is available under CC-BY-SA unless otherwise noted.