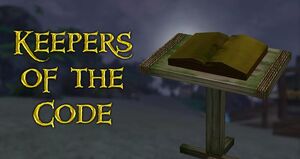 The Keepers of the Code are a guild of pirates who have picked up the mantle of fighting against Jolly Roger and his undead army after the Marceline Guild suffered the loss of their leader, Captain Walter

The Keepers are comprised of GM-played characters in The Legend of Pirates Online, who interact with players in-game but also post storyline elements on TLOPO.com.

Unlike, the Marceline whose members openly confronted GM-played East India Trading Company, Royal Navy and Casa de Muertos characters, The Keepers appear to be focused on intelligence gathering and sharing with other pirates to aid covertly. This could change in time.

According to tales told by Alania Seastone, The Keepers of the Code were once a 'vast and powerful' guild but they have fallen on hard times as more members fell to Jolly Roger's forces.

The origin of The Keepers of the Code goes back to the Pirata Codex itself, the Pirate's Code set down by captains Morgan and Bartholomew.

At it's creation, the Brethren Court named the first Keeper of the Code. The Keeper, largely a force in his own right, established a guild to act as a network of informants as well as work in the shadows to promote and establish the Brethen Court's law across the Caribbean.

The positions of Keeper and Guildmaster were handed down to ensure the Code was kept by all pirates. Most recently, Captain Teague holds the title of Keeper and the last bestowed master of The Keepers of the Code was Jeremiah Seastone.

Jeremiah was already a strong, powerful pirate when he was given the authority by The Keeper to enforce the Court's will. To that end, Seastone had a gypsy forge him a Voodoo Staff of immense power. No pirate dared question the code in their presence, even Jolly Roger himself feared Jeremiah's wrath.

Sadly though, Seastone was not immortal and in time, age and sickness took their toll. As he withered away, Jeremiah bequethed his position to his daughter Alaina, including his formidable staff.

Initially, members of the guild did not take to the idea of this young woman usurping leadership and indeed some tried to unseat her. But, in time, mastering the staff helped her learn to master the guild and its members. That troubling time did cost The Keepers numbers, but Alania had some new strategies in mind.

The Keepers of the Code began to infiltrate the local town taverns, gathering and spreading information, as well as recruit from the regulars. It took nearly a decade, but Alania rebuilt The Keepers once more into a force for the Court. This was often done at some cost, including selling information or trading in secrets.

In most recent times, the Guild like many pirate organizations began to suffer heavy losses as Jolly Roger and Cutler Beckett briefly joined forces. Even after Beckett's demise, Jolly's power still grows and The Keepers know they are needed now more than ever.

Captain Alaina Seastone (Guild Master) - Alaina is the daughter of Jeremiah, the previous GM. She has spent over 10 years building a network of spies and informants across the Caribbean.

Wade McCallister (First Mate) - Formerly of the Merchant Navy and a crew mate to Bartholomew Roberts himself, Wade was captured by pirates. He eventually joined Bart as navigator and they fled.

Captain Edward Graves - An imposing and intimidating pirate with a commanding and temper not to be trifled with. He commands a small fleet of pirate ships. Graves naval experience and mind for strategy made him one of the most dangerous pirates in Caribbean.

Lady Grace Anderson  (Spy) - Born into wealth on Padres del Fuego , Grace has an upper class position and connections with many powerful people, including those in the East India Trading Company. She uses this proximity to keep an eye out for goings on and passes that information back to the other members. Grace seems to have a knack for getting into places without notice. She then passes along whatever she's discovered to The Keepers in the EITC Report

Charity Ironflint - Once a chambermaid and sold into servitude by her own mother, Charity snuck aboard a ship disguised as a boy. In the Caribbean, she befriended and was mentored by Anne Bonny and Jack Rackham.

Joan Tidewalker (Mystic) - A member of Captain Grave's crew, this sea-witch is one of the few who dare speak back to him. Graves trusts her powers of perception and knowledge of voodoo and supernatural lore implicitly. Joan is described as being a bit smaller in stature with bronzed skin, russet-colored hair and carrying a voodoo staff.

Jack Alberic - A seasoned sailor and pirate, Jack has working knowledge of the Caribbean's ocean passages.

Remy Lemaitre - A Frenchman and former mercenary for the East India Trading Company, Remy is fairly knowledgeable in the use and maintenance of firearms.

Nathan - Little is known about Nathan, other than being a recent recruit and he's very loyal to The Keeper's leadership.

Jesse Tideus - A recent addition to The Keepers, the fastidious Jesse is not always one for a straight up fight, saying he prefers negotiating. In addition to priding himself on his appearance and fashion sense, Jesse considers himself to be quite the ladies man.

Jeremiah Seastone (Deceased) - The previous guild master, acquaintance of Captain Teague and Alaina's father. Even before become the guild's master, Seastone was a formidable presence in the Caribbean.

The lore regarding The Keepers of the Code was laid out in journals and logs of it's members and can be found here:

Retrieved from "https://piratesonline.fandom.com/wiki/The_Keepers_of_the_Code?oldid=330793"
Community content is available under CC-BY-SA unless otherwise noted.