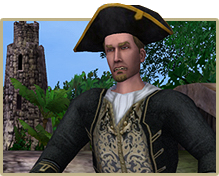 The Black Guard Cometh was a GM event introduced in the summer of 2009. 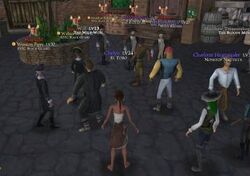 Other versions of this event have occurred, mostly during feasts and celebrations of Pirates (Mardi Gras, Brethren Feast, etc.). These varied versions involve the Black Guard leaders disrupting the events by using their 'magic' (which they gained from their ally of that time - Jolly Roger) to attack pirates.

Originally, players were allowed to attack the Black Guard GMs, but this feature was removed due to the disruptive behavior of certain players. The event would conclude with the Black Guard losing and leaving the island for good.

Since many pirates disrupted such events with their rude behavior, the Game Masters were later given new powers to knock out problem players.

Retrieved from "https://piratesonline.fandom.com/wiki/The_Black_Guard_Cometh?oldid=324902"
Community content is available under CC-BY-SA unless otherwise noted.