Thatch Roberts is an officer of the Marceline guild. So far, the only major appearances he has made was during the 2011 Mardi Gras Festival and in the Marceline Guild, at Your Service! event. He was also at the Victory Celebration 2011. He also took part in the Fishing with the GM's event, both the 2012 and 2013 Feats of Strength Competitions, and the Brethren Feast Weapon Giveaway.

Since retiring from the Marceline, Thatch now runs an Underground Warehouse. The place may not look like much but it's a great place for pirates to store their goods away from prying eyes.

Also, it functions as a Meetup Location for pirates. Thatch hosts and acts a musician there. 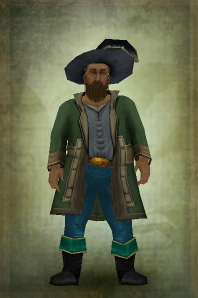 Retrieved from "https://piratesonline.fandom.com/wiki/Thatch_Roberts?oldid=341538"
Community content is available under CC-BY-SA unless otherwise noted.