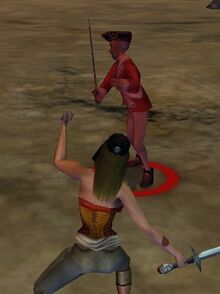 Taunt makes your enemies angry and more prone to missing their attacks, while decreasing the attack power they have for a certain amount of time.

This skill also makes the enemy attack YOU - so it is useful for keeping aggro off of lower level pirates! And it's great for a crew member acting as the Tank.

Increasing this skill increases the time that the enemy is angry.

To use Taunt, you must have your sword drawn and press 3 or click

Game Note - Thrall Captains, Kelpbrains, Flotsams, Seabeards, EITC Mercenaries, Ghosts and many Undead also have this ability, but instead of doing the single point of damage when used by a pirate, when used by these bilge rats they can deal over 100 damage!

Retrieved from "https://piratesonline.fandom.com/wiki/Taunt?oldid=330282"
Community content is available under CC-BY-SA unless otherwise noted.