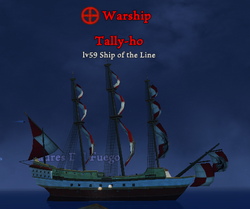 The Tally-ho is a Warship Ship of the Line appearing around the level of 59-61. It spawns as part of the Scoundrel of the Seas. Like all Bounty Hunters and Warships, this vessel will pursue any pirate who has been plundering a large number of ships and will relentlessly give chase until sunk. With armor that is nearly unbreakable, this is a highly dangerous Warship; this ship goes faster than the ships in the treasure fleets. She uses firebrand for broadsides and explosive for deck cannons. Her sails, like those of the En-Garde, have a unicorn emblem on them.

Retrieved from "https://piratesonline.fandom.com/wiki/Tally-ho?oldid=324887"
Community content is available under CC-BY-SA unless otherwise noted.