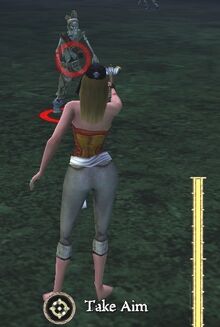 Take Aim is a shooting skill that allows the pirate to do more damage by targeting an enemy for a long time to improve accuracy and damage.

By holding down the left-mouse button, the pirate will hold the pistol out and sight a target. A bar will appear and begin to increase. The longer the button is held down, the higher the bar will rise. Releasing the button anytime, the pirate will shoot - but more damage is done the higher the bar goes. At the middle mark the damage dealt is 200% of a normal shot, at the top of the bar it is 300%.

Increasing this ability will increase the damage.

(+The total damage is also affected by the pirate's Gun skill, ammo type, enemy type and any special weapon abilities.)

The pirate's aim can be stopped! If they are stunned or struck by an enemy in a particular fashion, especially a dagger attack, they lose aim and must start over.

﻿ On some types of guns you can't move while you take aim. For example: when using a blunderbuss, you can walk around while taking aim, but once the shot is released, you cannot move while reloading. With a musket or a bayonet, movement is impossible while taking aim.