The term Alpha refers to the period of time during The Legend of Pirates Online in which the game was closed to only those with Alpha Keys. It began on September 11th, 2015, at 3:15pm EST.

Semi-Open Alpha began on Father's Day, June 19th, 2016 at about 4:14pm EST. Users could now register an account with TLOPO without having an Alpha Key, and could sign up for "play times" to have access to TLOPO. The associated News Story that was published on piratesonline.co can be seen here:

The transition to the end of Alpha was announced on September 10, 2016. The TLOPO team scheduled the official closure of Alpha for September 19, 2016, with a number of in-game releases and events leading up to it.

At approximately 7:04PM EDT on Monday, September 19th, 2016, TLOPO shut down their Alpha servers in preparation for Beta.

The following message was shown to all users who were online during the closure: 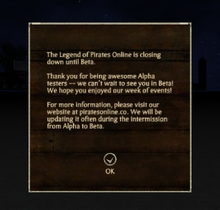 A collection of screenshots showing progress made during Alpha.

A collection of videos showing progress made during Alpha.

The currently planned testing phases are:

Retrieved from "https://piratesonline.fandom.com/wiki/TLOPO_Alpha?oldid=321432"
Community content is available under CC-BY-SA unless otherwise noted.