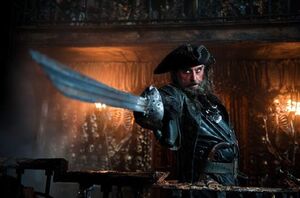 The Sword of Triton is the sword carried by none other than Blackbeard himself, the infamous Edward Teach!

According to legend, the sword originally belonged to the mighty sea deity Triton. This weapon, which some say was forged in lost Atlantis, channels mystical power that brings dead matter to life. Brandishing the Sword of Triton, Blackbeard commanded unearthly power aboard his ship. Among its distinguishing characteristics, the sword is also embedded with one of the three sapphires of Triton.

Blackbeard's Sword Has Been Unearthed

First released in Pirates of the Caribbean Online, Sword of Triton was later released with an upgrade in The Legend of Pirates Online; extending the length of its blade and making it a Legendary broadsword.

It grants its wielder the abilities to sail faster at sea with a boost to Windcatcher, and deal more damage against Jumbees found aboard The Queen Anne's Revenge and in Hollowed Woods.

But that's not all - the weapon's unique ability, Tack n' Tow, allows the user to summon supernatural ship's towlines and trap enemies in place - just like in the film On Stranger Tides. This ability functions much like the voodoo hex Grave Shackles.

After several days of intense battle to find the rumored item first, the Marceline Guild has unearthed the mighty Sword of Triton!

Mysteries still surround this infamous blade... How did it come to the Caribbean? Is its appearance an omen of something deadlier yet to come?

Then a few days later...

By now, all Pirates should have retrieved Blackbeard’s Sword of Triton for their very own.

Now a strange shift in tides has brought many a Pirate into heated battle with ghost flagships. Pirates are suspicious folk, so rumors naturally abound… Perhaps this be the will of Blackbeard to draw Pirates into his clutches? Perhaps even the mighty sea deity Triton himself seeks revenge?

One thing is for certain: it be no coincidence that Blackbeard’s sword compels Pirates to fearlessly disable, grapple and board these mighty flagships. What could all this mean for the Caribbean seas?

The Sword of Triton was originally a promotional item for Pirates of the Caribbean: On Stranger Tides. Despite being known as "Blackbeard's Sword", the sword is wielded by Hector Barbossa by the end of the film and the film takes place BEFORE the Pirates Online timeline (set between the first and second films.)

Players could Redeem a code to add this version to their inventory (Redeem Code Sword).