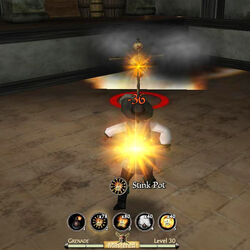 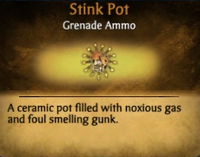 Stink Pot is a ceramic pot filled with noxious gas and foul smelling gunk. This grenade does less damage, but has a lingering effect on those struck by it. It also has a larger explosion range than other grenades.

Increasing the level of this ability increases damage, but also increases the amount of time enemies are affected by the stench!

They can be purchased at any gunsmith shop, once the pirate has learned this ability.

Retrieved from "https://piratesonline.fandom.com/wiki/Stink_Pot?oldid=336581"
Community content is available under CC-BY-SA unless otherwise noted.