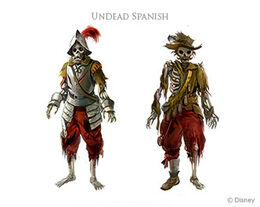 The Spanish Undead sailors who lost their lives in combat with the French have risen again as Jolly Roger's servants. However, these loyal Spaniards would much rather carry on their fight with the French Undead. Unlike the French who use foils, they all use dual cutlasses!

You can find any Spanish undead at Cutthroat Isle and Cutthroat Jungle, as well as the Lava Gorge on Padres del Fuego. They also appear during invasions.

These rogues wield two swords in combat and perform quick combos with them. Unlike their slightly more restrained French Undead counterparts, they are very savage in their assaults.

Game Note - These levels can vary on Flagships as the levels of enemies on flagships change depending on you and your crew's notoriety level.

Not only has Jolly resurrected the sailors, but he has risen a fleet of ships from their watery graves.

You can find these stalking around Cutthroat Isle. All the ships are war sloops

These always come with a dangerous crew of Spanish undead to man them.