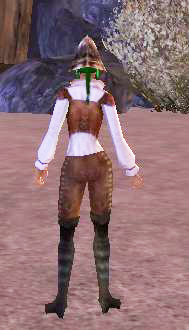 Spanish Conquistador is a matching outfit offered for purchase by the Peddlers on Padres Del Fuego, Cuba, Port Royal, and Tortuga. It is similar to the outfit El Patron wears, and more specifically, the hat and shirt.

The Cabaset is similar to Steel Cabaset and Bronze Cabaset that you can purchase from a PvP Infamy Reward Merchant.

The name "Guy Fawkes" on this outfit's shirt and blouse is most likely a reference to 16th century Guy Fawkes, who part of a conspiracy to overthrow King James and blow up the English parliament.

The outfit was additionally leaked the morning of October 1st, and again in the evening on October 23rd.

Retrieved from "https://piratesonline.fandom.com/wiki/Spanish_Conquistador?oldid=339666"
Community content is available under CC-BY-SA unless otherwise noted.