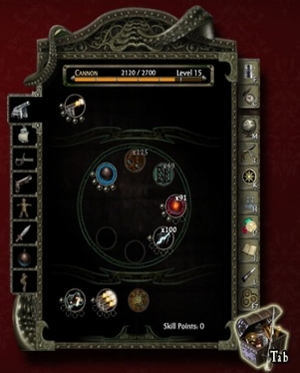 Pirate characters have abilities they can use to defeat enemies, aid friends and navigate the sea.

Using these skills gives the player experience points (xp or reputation). When the experience points for that skill reach the maximum for the pirates current level, their level increases and they receive a Skill Point.

To review your abilities, press 'K' or Click on the Sea Chest, then click the Helm Wheel, to display the skills menu. The pirates skills will be listed in the menu.

Select a skill icon to display the pirate's abilities and levels in that skill.

In Pirates of the Caribbean Online currently include:

Potions and Fishing are also skills but they do NOT display on this menu since they are Passive skills. You cannot set specific abilities for them,

Once a pirate has received enough reputation in that skill to earn a Skill Point, they can improve an ability or add a one.

Press 'K' or Click on the Sea Chest, then click the Helm Wheel, to display the skills menu. The pirate's skills will be listed in the menu. Select a skill to display the pirate's abilities and levels in that skill.

If any Skill Points are acquired they will appear in the lower-right. To spend a point, just click on the ability you wish to learn or improve.

Warning - Once a point has been spent, it CANNOT be retracted. The only way to recover a Skill Point is by going to a trainer and re-allocating ALL points spent in that ENTIRE weapon. The cost of this increases each time if you keep retraining skills.

Reputation earned from using skills also go to the pirate's Notoriety level, which is separate but increases as the pirate uses their weapons, sinks ships or heals others with voodoo.

Potions are unique in that there are no additional abilities to learn or acquire. But, as the pirate makes a potion they earn Reputation. New levels of Potion Skill will add new potions to the list of potions the pirate can currently brew for their specific skill level.

Fishing skills are also unique, with additional abilities learned every level. But, the pirate cannot choose the ranks of their skills.

Many items boost skills beyond the number of ranks that players allocated their skill points to. However, these items cannot boost skills that are locked. Thus, if a player wants to take advantage of a certain skill for which he has a boosting item, he must make sure that he himself has allocated at least one skill point to it.

Retrieved from "https://piratesonline.fandom.com/wiki/Skills_(Menu)?oldid=331870"
Community content is available under CC-BY-SA unless otherwise noted.