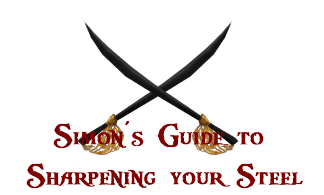 Whether your starting out with a rusty cutlass or looting with a Legendary Blade, Swords have been and most would agree the easiest weapon to use. In this guide I will explain how to level your Sword and the different types of Blades.

In the Game there are 3 main groups of Swords: Sabres, Cutlasses and Broadswords. You will also have the ability to find Cursed Blades after completing the Raven's Cove Story Quest. After you defeat El Patron, you gain your first cursed blade.

Sabres are useful when you are fighting a single enemy such as a Boss. They allow you to gain more hits on the Enemy therefore; gaining more rep. However they give the lowest damage out of the 3 groups, so be sure to make sure you are topped up on tonics before you set off.

The Cutlass is the first weapon you receive in the Game and allows you to attack a single enemy (unless using Sweep). It gives powerful blows to the enemy thus increasing your Pirate's Survival rate by a large amount. The Cutlass is often favored by newbies to the Game, it is also the easiest weapon to time your attacks with allowing attack bonuses to help you defeat that enemy(ies)

These skills go into effect automatically when you spend your skill points on them.

When you first get your sword I suggest heading for Fort Charles on Port Royal, it may also be handy to go to an ideal server as many people hang out in Fort Charles and may even be able to lend you a hand.Start out with the guards and cadets hanging round the outside of the Fort then aim for those by the bell arch

Soon the Enemies in Fort Charles will be grey tags and with give little rep, now is the time to set Sail for Kingshead, be sure to have a broadsword ready to might those veterans.It is best to bring along a crew some to heal and so that you get a crew bonus.

The Scurge of the Caribbean: Levels 16-25

Retrieved from "https://piratesonline.fandom.com/wiki/Simon%27s_Guide_to_Sharpening_your_Steel?oldid=236202"
Community content is available under CC-BY-SA unless otherwise noted.