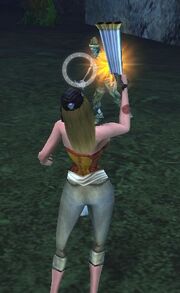 Shoot is the basic gun skill, and defines how much damage the pirate deals with an uncharged shot. Once the pirate acquires the pistol from Captain Hector Barbossa, they have this ability at Skill Level 1.

Increasing this ability increases the amount of damage dealt. The Pistol and Musket both use this skill but for a Blunderbuss it is replaced with Scattershot.

Note: Shoot is also the name for a basic cannon skill.

Retrieved from "https://piratesonline.fandom.com/wiki/Shoot?oldid=323005"
Community content is available under CC-BY-SA unless otherwise noted.