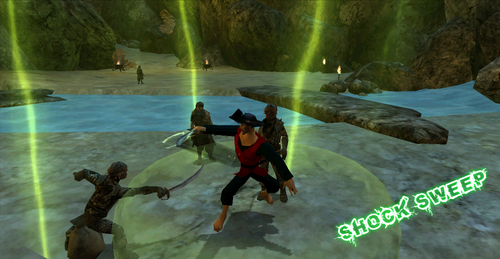 Shock Sweep is a powerful area ability exclusive to the legendary Thunderspine Sword and The Emerald Curse. It is a Break Attack which means you will have to attack enemies or be attacked to get this ablity to  charge. This attack is similar to Sweep. But instead it strikes all enemies near its user with lightning in a Sweep form. It appears as a green wave that spreads all around its user. This ability is similar to Cursed Thunder, except it it is combined with Sweep. This attack is a cousin to both Inferno Sweep and Freeze Sweep. The burst of energy that comes out is similar to Nature Aura. It does 1,500-2,500 damage.

Weapons with this Ability 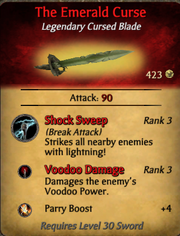 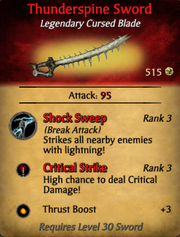 Retrieved from "https://piratesonline.fandom.com/wiki/Shock_Sweep?oldid=324710"
Community content is available under CC-BY-SA unless otherwise noted.