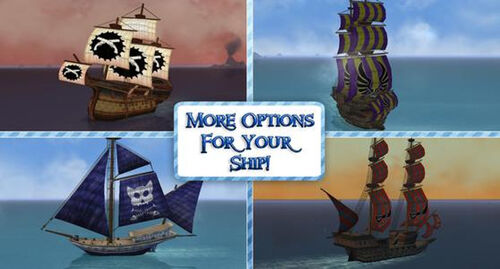 Ship Customization is a game feature which allows players to customize their own ships. Players may do this by visiting any shipwright and choosing the "Upgrade" option, then choosing a ship to upgrade. Ships can have visually customizable hulls, rigging, sails, emblems, and special broadsides (hull ranks 4-6 only). Only Medium and War Class Ships are able to be customized. Light Class Ships and Ships of the Line are unable to be customized.

Players may change the color of a ship's sails by choosing from a variety of color options. Cost to change colors range from 1 to 10,000 gold.

The price does NOT depend on ship class.

These sail colors below were not released in Pirates of the Caribbean Online or its Test Server. However, they were released in The Legend of Pirates Online, along with the addition of five new stripe colors.

These special sail colors are only available from Dorbie Danton on Bilgewater after the pirate completes the Story Quest: The Keepers of the Code chapter.

An emblem can be embossed on your ships sails, or the sail can be left blank. Most emblems are available in Black or White. The price of nearly all emblems is 5,000 gold. No materials are required for emblems.

These sail emblems are only available from Dorbie Danton on Bilgewater after the pirate completes the Story Quest: The Keepers of the Code chapter.

To customize your vessel, you must gather and collect the materials you need. The needed material will depend upon the type and level of grade.

You can only obtain the material by sinking enemy ships, particularly warships and bounty hunters. As you plunder and fill up your cargo you will notice that royal chests are replaced by materials chests. Any found materials are stored in your Materials Pouch.

The various materials include: 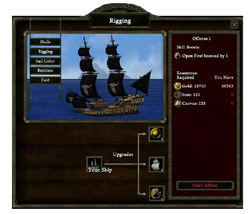 The ship's rigging may be upgraded to give boosts on sailing skills (Full Sail, Open Fire and Take Cover).

This feature will require gold, iron, steel, silk and canvas.

There are three types of rigging upgrades, each with two levels:

The hull is the body of the ship, constructed of timbers and sealed watertight with caulk. There are three types of basic hull upgrade paths a pirate can purchase, and then another five advanced ones.

The hull is the body of the ship, constructed of timbers and sealed watertight with caulk. There are 5 types of advanced hull upgrades a pirate can purchase, but which ones are available depends on the tier chosen for I-III ranks hulls.

Available through the Reinforced tier.

Available through the Reinforced and Cargo tiers.

Available through the Cargo tier.

Available through the Streamlined and Cargo tiers.

Available through the Streamlined tier. 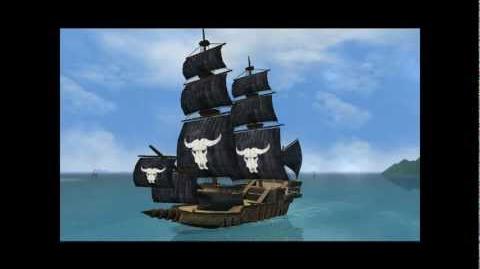 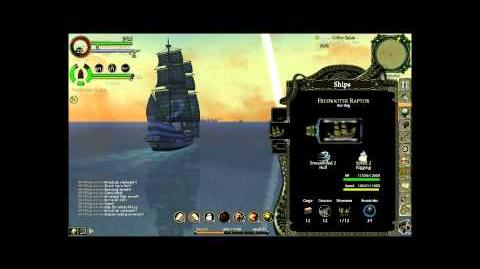