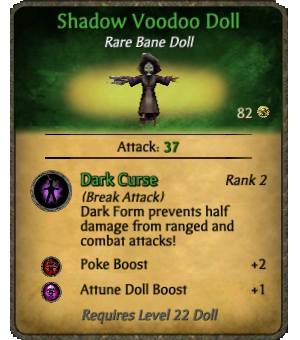 The Shadow Voodoo Doll is a rare bane doll introduced during the 2017 Halloween Update. This doll's wielder gains a small Poke boost. However, the two notable bonuses of this weapon are the Dark Curse Break Attack, which, when activated, will halve the damage of incoming ranged and melee attacks, as well as a +1 Attune Doll boost, which allows you to attune an extra target.

Retrieved from "https://piratesonline.fandom.com/wiki/Shadow_Voodoo_Doll?oldid=339812"
Community content is available under CC-BY-SA unless otherwise noted.