Shadow Crow is a class of War Sloop flagships in the service of the French Undead and Spanish Undead fleets. It is considered to be the weakest undead vessel in the game, however they can still manage to sink a War Frigate asunder if they aren't careful.

These vessels can be found around Cutthroat Isle (Spanish) and Isla Cangrejos (French). They carry eight cannons and 10 broadside guns total.

They attack with Fury rounds for deck cannons and Chain Shot for broadsides. Depending on their nationality (French or Spanish), and have crew complements of French or Spanish skeletons. 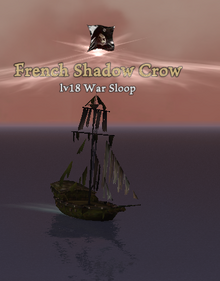 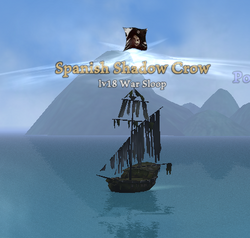 Retrieved from "https://piratesonline.fandom.com/wiki/Shadow_Crow?oldid=322831"
Community content is available under CC-BY-SA unless otherwise noted.