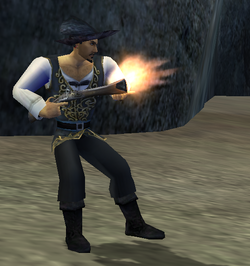 Scattershot replaces the Shoot skill when using a blunderbuss. Instead of firing a single bullet, Scattershot fires a spray of small pellets at the enemy, since a blunderbuss is, in effect, a muzzle-loaded shotgun. However, it still only uses the equivalent of one bullet. The spread of bullets hits all enemies that are in line of sight and within short range, which makes it useful since you do not have to aim directly at the target to get a hit.

Increasing your rank level in this Skill increases the damage dealt.

Retrieved from "https://piratesonline.fandom.com/wiki/Scattershot?oldid=325588"
Community content is available under CC-BY-SA unless otherwise noted.