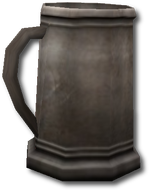 Rum is a distilled beverage made from sugarcane by-products such as molasses and sugarcane juice by a process of fermentation and distillation. The distillate, a clear liquid, is then usually aged in oak and other barrels. The majority of the world's rum production occurs in and around the Caribbean and in several South American countries, such as Colombia, Venezuela, Guyana and Brazil, though there are rum producers in places such as Australia, Fiji, India, Reunion Island, Mauritius, and elsewhere around the world.

The association of rum with the Royal Navy began in 1655 when the British fleet captured the island of Jamaica. With the availability of domestically produced rum, the British changed the daily ration of liquor given to seamen from French brandy to rum. While the ration was originally given neat, or mixed with lime juice, the practice of watering down the rum began around 1740. To help minimize the effect of the alcohol on his sailors, Admiral Edward Wernon directed that the rum ration be watered down before being issued, a mixture which became known as grog.

Since Pirates Online is an E10-Rated game and produced by Disney, NPCs may be seen holding tankards and talking of spirits; drinking is NOT part of the game itself.

Often, rum is an object in a quest; in particular during The List quests for Gunner - where the pirate has to find, steal or make numerous kinds of rum.

Retrieved from "https://piratesonline.fandom.com/wiki/Rum?oldid=319037"
Community content is available under CC-BY-SA unless otherwise noted.