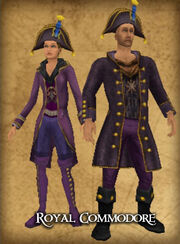 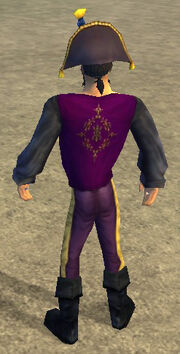 Royal Commodore is a matching outfit offered for purchase by Peddlers. The Queen Anne's Revenge boss LaSchafe seems to be wearing the Black Bicorne hat from this outfit. In addition to having a Commodore theme, the set is also New Year's Eve themed as well, making it a common January Peddler Outfit. Decorative firework emblems are displayed on the blouses and shirts.

Retrieved from "https://piratesonline.fandom.com/wiki/Royal_Commodore?oldid=340451"
Community content is available under CC-BY-SA unless otherwise noted.