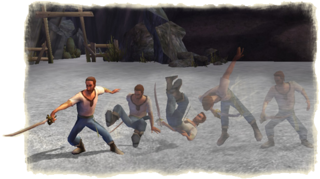 A Rolling Attack is a special sword strike, whereby the pirate performs an impressive forward roll to surprise their enemy with a vicious thrust as they come up. The Shark Blade and Pirate Cutlass groups feature this ability. Rolling Attack charges over time when the weapon is equipped.

Note - This skill recharges faster than most other weapon skills. Note - You have to be away from the enemy for it to work. Rolling attack can also be used for moving quickly.

The following Cutlasses have this ability:

Retrieved from "https://piratesonline.fandom.com/wiki/Rolling_Attack?oldid=330942"
Community content is available under CC-BY-SA unless otherwise noted.