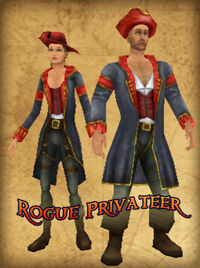 Rogue Privateer is a matching outfit offered for purchase by Peddlers on Padres Del Fuego, Cuba, Port Royal, and Tortuga. As the name implies, it has a sea captain theme, like something privateers would wear.

Both male and female versions have a gold trimmed overcoat with red collar and cuffs, matching red vest and hat, brown calf-length boots, and buckle belt. The trousers appear to have straps and suspenders built in.

This set was released at the same time as the Spectral Cutlass.

Retrieved from "https://piratesonline.fandom.com/wiki/Rogue_Privateer?oldid=340956"
Community content is available under CC-BY-SA unless otherwise noted.