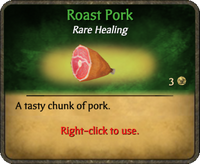 Roast Pork appears during celebrations, like the Founder's Feast (now known as the Gathering of the Guilds Feast), or Mardi Gras, when pirates build bonfires on the beaches of Tortuga and roast whole pigs over fire pits. Pirates are free to take some of the delicious meat - which has potent healing. One piece of pork can replenish all of the user's health. Each visit to a fire pit grants 5 pieces of delicious pork at a time. They are used the same as any tonic. Roast Pork can also be used to revive others.

Smoking meats has long been a tradition in the Caribbean. The term buccaneer is actually derived from the French word "Boucanier". A boucan was a rack used for smoking meat. Settlers in the region became known for this method and when they rebelled against local rule - they were simply referred to as boucaniers. 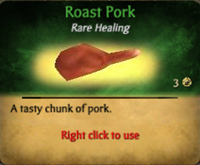 The Old Roast Pork pictured on its Info Card.

Retrieved from "https://piratesonline.fandom.com/wiki/Roast_Pork?oldid=341829"
Community content is available under CC-BY-SA unless otherwise noted.