Rip Tail is a Giant Scorpion Boss, a large poisonous arachnid under the control of Jolly Roger's voodoo.

He appears at levels 1-5 and is not terribly dangerous to most pirates but can sometimes be found near colonies of other scorpions. 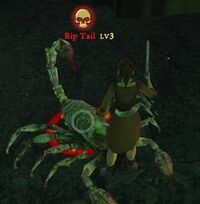 Retrieved from "https://piratesonline.fandom.com/wiki/Rip_Tail?oldid=333216"
Community content is available under CC-BY-SA unless otherwise noted.