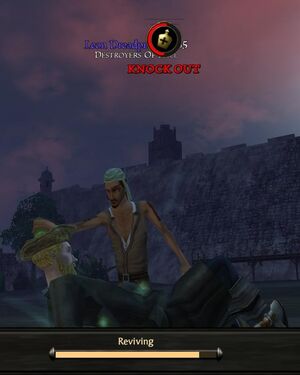 Once a pirate's health reaches 0 life, they fall to the ground and are considered to be Knocked Out. They will then be offered a choice.

They can be sent off to Jail, whereupon they will awaken and can continue their quest (levels 10-49 with the grogginess effect ), or they can wait to be Revived by another pirate who has a tonic. This other pirate will sacrifice one of their health tonics to help the pirate regain lost Health and Voodoo Power.

To perform a Revive, simply approach a downed pirate, who appears with a bottle with a first aid symbol over their head, and looks groggy. Then, press Shift. Your pirate will pour a tonic on the injured pirate. This will take several seconds, so be careful that you don't befall the same fate as they did. If you are attacked while trying to Revive, you will be forced to stop until the enemy has been dispatched or distracted. The Revive meter will start over, so you must work quickly and carefully. However, if the knocked out pirate's aid circle is already empty when you begin the process of revival, it will continue. And if you are interrupted while reviving said Pirate, he/she will get an extra few breaths' worth of time, during which you can again try to revive, or dispatch an enemy. Timing is important, however, as you are only granted that time before the Pirate is thrown in Jail and rendered Groggy.

Once the tonic kicks in, the revived pirate is ready to go, and the player who revived the knocked out player gets 15 Reputation points as a reward.

If, however, another player fails to revive the downed pirate before the decreasing red circle around the tonic symbol elapses, the pirate will black out and be teleported to jail anyway. You will not be groggy after being revived.

Retrieved from "https://piratesonline.fandom.com/wiki/Revive?oldid=324576"
Community content is available under CC-BY-SA unless otherwise noted.