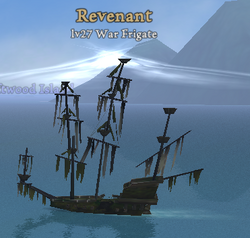 Revenant is a class of skeleton War Frigate in service of Jolly Roger. This vessel carries seven deck cannons and ten broadside cannons on each side.

In addition to traditional ammunition, they attack with Fury and Thunderbolt rounds. They can be found around many populated islands, but are also part of a large skeleton fleet near Padres Del Fuego. Also located near privateering islands, Driftwood Island, and Isla Perdida.

Retrieved from "https://piratesonline.fandom.com/wiki/Revenant?oldid=331481"
Community content is available under CC-BY-SA unless otherwise noted.