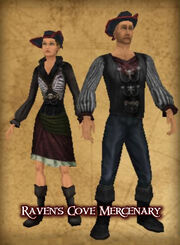 On both the male and female Halloween shirts, there are skulls on the front and what looks to be a bat along the lower back, which gives off a spooky look for Halloween. It was discovered and introduced after Peddler Phillip discovered an abandoned ship drifting off the coast of Raven's Cove filled with the outfits.

As dark and mysterious as the isle it originated from, it's rumored original guardians of Raven's Cove wore this garb.

Game Note: The Halloween shirt was first seen in a video about the then just released potion brewing mini-game. The male outfit was also featured on an email POTCO sent out about peddlers coming to the Caribbean.

Retrieved from "https://piratesonline.fandom.com/wiki/Raven%27s_Cove_Mercenary?oldid=331400"
Community content is available under CC-BY-SA unless otherwise noted.